Anatomy of a glossary

A glossary is a collection of common data definitions, typically focused on defining the meaning of data. An organization may have multiple glossaries that represent different collections of definitions, each reflecting a scope of use or a source of the definitions.

Each glossary defined should have a well defined content and an owner, who is responsible for ensuring that the contributed content meets the needs of its consumers.

Figure 1: Elements within a glossary

The sections that follow provide more information about these concepts and how they are used. There is further information on how to define a glossary in the Coco Pharmaceuticals scenarios.

Inside a glossary term

At a minimum glossary term has a name - this is the concept it describes, and a short description that explains at a high level what this concept means. This short description should distinguish it from other terms.

For some glossaries, this may be all that you need. However, if this is an important term and the consumers of it will want to know much more, then the glossary term can be built out to include a more detailed description and supplementary information such as: 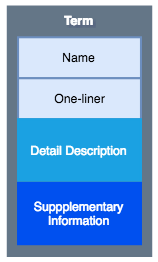 Figure 2: Contents of a glossary term

The glossary term may then be organized into one or more categories, classified and linked to related terms. 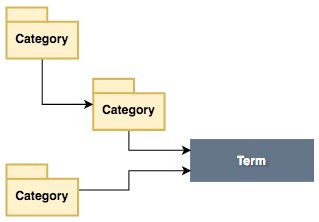 Glossary terms can be linked together in pairs to show that they are related in some way.

The relationships between glossary terms are divided into two groups:

The contents of a glossary can be further described using classifications. These are descriptions that tell the consumer more about how the glossary is defines and used.

Classifications for a glossary

A glossary may be classified to describe the way its content should be used.

Classifications for a category

Classifications for a term